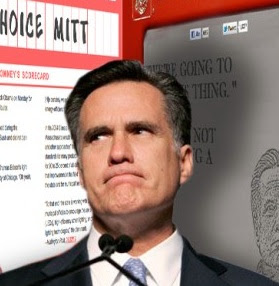 Presumptive Republican presidential nominee Mitt Romney took a tumble in Louisiana Sunday, dropping the contest in the conservative state by a whopping 22 points. Santorum, no southern Baptist, won 49% of the votes, with Romney a distant second. For a candidate we were being told was inevitable since before a single vote was cast, he certainly doesn't seem to be persuading the bedrock of the party, conservatives.


"Santorum won every parish (the state's equivalent of a county) in Louisiana except one--Orleans Parish, which encompasses the City of New Orleans."

Levin Puts Questions to the Questioners

The Obama Administration has been big on using Federal resources to punish its political adversaries. The latest is the push by the IRS to probe a number of Tea Party organizations under the guise of "investigating" their application for 501 c 3 status. To this one of the good guys on the scene is pushing back, asking for a probe of the IRS. Submitting his request under the banner of the small foundation he heads, Mark Levin has formally requested an immediate investigation into possible misconduct by the Internal Revenue Service’s Exempt Organization (EO) Division:


“Recent media reports indicate that the EO Division is using inappropriate and intimidating investigation tactics in the administration of applications for exempt status submitted by organizations associated with the Tea Party movement,” Levin wrote.

“The information demanded in many cases goes far beyond the appropriate level of inquiry regarding the religious, charitable and/or educational activities of a tax exempt entity. The inquiries are not relevant to these permitted activities. Inquiries extend to organizational policy positions and priorities, personal and poltiical affiliations, and associations of staff, board members and even family members of staff and board members.”

“Finally,” said Levin, “reports that Tea Party-related organizations are being singled out for the IRS’s intrusive inquries raises serious questions about the propriety of the personnel involved in the evaluation of tax exemption applications.” 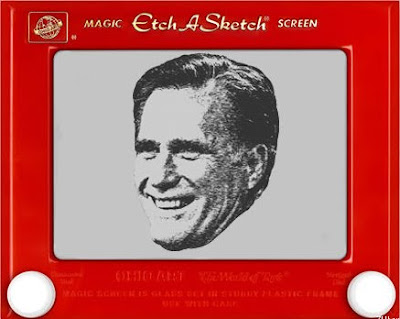 The party informs us the nomination process is over. It is time to get behind our leader. The man the party elites have selected shows consistently poorly in must win conservative states, and shakey in battle ground states, but he has won primaries in one blue state after another, states he will never win in the general election.

In excited anticipation of the Romney juggernaut, CNN asked long time aide Eric Fehrnstrom whether or not the candidate has been stained, forced by his fellow Republican challengers to appear too conservative. His response:


"Well, I think you hit a reset button for the fall campaign. Everything changes. It's almost like an Etch A Sketch," Fehrnstrom told CNN's John Fugelsang. "You can kind of shake it up and restart all of over again.

So once Fehrnstrom gets his guy through this Primary trouble, he'll just take him, turn him over, give him a good shake and we're starting over from scratch again.

Could you do that with Ronald Reagan? Sarah Palin? Rick Santorum? I have a hard time thinking of John McCain or George H.W. Bush that way, though a case could be made. But now here is a man who has worked with Mitt since he was governor, and the picture he paints is the one we were always worried about.

Mitt has been proclaiming himself the "real" conservative in the race, with a deluge of campaign ads that have driven down turnout and dispirited the party. He's been blowing soap bubble fantasies, where his competitors are painted as moderate to liberal, while the Governor from Massachusetts passed himself off as the real deal. Yes, if we are to believe the pitch, it seems his true identity was hidden from view as he walked among the ordinary citizens of the Commonwealth of Massachusetts. But now, now that he is needed, superman like, he will shed that exterior disguise and the man of steel will be revealed. Revealed, that is, until Fehrnstrom decides it's time to turn him over and give him a good shaking.

Please. Romney has impressed me as a man who will say anything, do anything to make himself popular and get himself elected. From my perspective, that does not make for a candidate I would warm to. And all his negative campaigning... stinks.

What are his core beliefs, and what will he fight for, if anything? This is the most critical election that we have faced in my lifetime, and the answer to that key question is... I'm not sure.


Posted by James Nicholas at 12:42 AM 2 comments: Links to this post 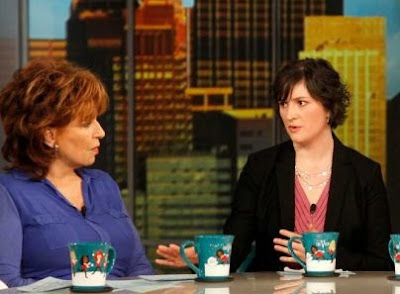 
"Thirty-year-old Georgetown Law student Sandra Fluke, who told a House Steering and Policy Committee hearing convened by House Minority Leader Nancy Pelosi last month that contraception can cost a student $3,000 during law school, told CNS News on Tuesday that she did not know that the Target store 3 miles from the Georgetown Law campus sells a month's supply of birth control pills for just $9."

With apologies to CNS News, Ms. Fluke was not speaking at a hearing. She was speaking at a press conference that Nancy Pelosi had convened and set up to appear as a hearing. Ms. Fluke was not a witness before the committee as she had no credentials to justify her being there and she had not been vetted. It turned out she was in fact a political activist who went to Georgetown specifically to challenge the right of the Jesuits that run the shool to abstain from providing abortifactants, Trojans and birth control pills to their young charges.

CNS News reported March 5th that as far as birth control pills go, a Target pharmacy three miles from the Georgetown University Law campus offers a month's supply of a generic form of the birth-control pill Ortho Tri-Cyclen for $9 to those people without health insurance coverage for the pills.

In addition, CNS News confirmed that a CVS pharmacy only two blocks from the Georgetown Law campus sells a month’s supply of the same birth control pills for just $33. That's about a dollar a day, and it's an easy walk. A Starbuck's Frappaccino once every third day would run you about the same.

Now Ms. Fluke, what were you saying about this contraception crisis?
Posted by James Nicholas at 10:22 AM 4 comments: Links to this post

The World We Live In

The search for the Toulouse murderer has arrived at its conclusion. After much speculation that the murderer might be a crazed serial killer, or perhaps one of a group of French soldiers who had been dismissed from the service for neo-Nazi membership, it was today revealed the shooter was motivated by different reasons:


The 24 year-old, known as Mohammed, told police he was a jihadist for al Qaeda seeking revenge...

You and I may not be surprised to learn this, but of course the possibility that the attack was motivated by Islamic ideology was never mentioned in the papers until Mohammed was cornered and in a shoot out with the police.

Earlier reports described the man as athletic and purposeful. Dressed in black, he pulled up on his scooter and shot dead a visiting young rabbi and his 6 and 3 year old sons. He then walked into the school courtyard while all the children tried to run away. He shot a 17 year old boy, then chased little Miriam into a corner, put his gun to her head and fired. Review of surveillance footage showed the man had a camera attached to his chest to record and disseminate video of the carnage he wrought. A school administrator who watched it described the man as calm and determined. All three of the young children were shot at such close range that powder burns marked their skin.

April Gavaza has written a biting piece on the matter:


...the children murdered were very close to my child’s age, an occurrence which fills the hearts of most mothers with an icy terror. You see your child’s face instead of the victim’s. Your rational brain stands by helplessly while the animal fear of losing your child pummels you with the imagery the actual mother of the deceased must have witnessed. You find yourself praying for a woman you will never meet, and for the first time in at least a week, hope that Hell is real and that bastard murderer will suffer tremendously for all eternity. The picture accompanying this article in the Telegraph is devastating. I look at it, I read the details of the murders, and I wonder, who has it in them to kill children in cold blood?

Another Steyn-worthy piece by the capable young mother of two. Read the whole thing here.

Little Miriam was guilty of nothing. Her killing was the act of an abominable person, and any religious teacher or political activist that seeks to excuse his actions is utterly contemptible. Likewise, the young rabbi was innocent, as were his two sons. So was the 17 year old. For that matter, the French paratrooper who thought he was selling a scooter was innocent as well, as were the three other paratroopers shot four days later.

The world we live in is a dangerous place. Timidity in responding to it, whether in avoiding the mention of Islam for fear the Western audience 'cannot handle' the truth, or making empty arguments of moral equivalence for the violent perpetrators only invites more violence against innocents.
Posted by James Nicholas at 4:17 PM 5 comments: Links to this post

- For Some, Bullying Just Comes Naturally

A couple of chuckles slipped out when Kathleen Sebelius of the Obama Administration stepped in to comment on the very bad practice of bullying one's fellow citizens. Presenting herself as an expert on the subject, Ms. Sebelius spoke as a part of the Cartoon Network's 'Stop Bullying' campaign. After viewing a video with middle-schoolers where the words 'stupid' and 'jerk' were specifically pointed out as inappropriate terms to use, the Health and Human Services Secretary waded right in:


“I think, very important, is for kids to understand how powerful you really are. You might feel like you’re not big enough, not strong enough, not--don’t have enough tools. But just saying, ‘Stop it! You know, you’re being a jerk!’

CNN's Don Lemon seemed little surprised to hear the terms thrown back at him from the Secretary of Health and Human Services. So, does it really hurt when you call someone a jerk, or does it depend on who does the name calling?

I guess the answer is obvious. Name calling just comes naturally to some people. Bullying must be the same way.
Posted by James Nicholas at 2:25 PM 7 comments: Links to this post 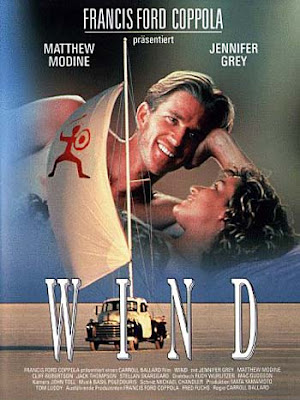 HBO's recently produced political docudrama "Game Change" reverses fact and inserts fiction in such large measure as to make the effort a laugher. That being the case, who better to play Sarah Palin then Julianne Moore, whose cardboard characterization was based on Ms. Moore's utter lack of knowledge of the character she was playing. I suppose this is part of the method acting. However, for a docudrama of a well known political figure, one would hope for a little less make-up and a little more method. Ms. Moore's Palin was no closer to the truth than the SNL version Tina Fey concocted, but than that was a known comedy sketch, intended to get laughs.  Here the humor was more accidental.

If the goal was to get as much wrong as possible, than HBO's Game Change was a stunning success. It was like a variation of 'The West Wing', the popular political drama starring well known liberal Martin "Not in MY NAME" Sheen, whose fictional president managed to get everything to work out swimmingly, regardless of the hard reality the rest of us have to deal with.

View the rest »
Posted by James Nicholas at 10:43 PM 7 comments: Links to this post