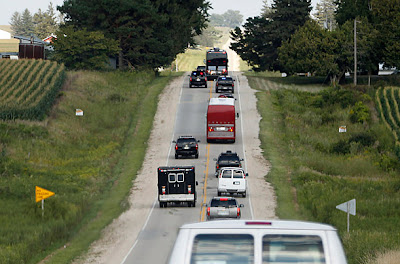 On the road again! Barack's magical mystery tour has hit the highway, first stop... Iowa. And no, it was not a Field of Dreams moment where Barry suddenly heard a voice out in an Iowa cornfield. More like he was pitching his usual knuckle balls and killing worms with his delivery.


"We had reversed the recession, avoided a depression, gotten the economy moving again," Obama told a crowd in Decorah, Iowa. "But over the last six months we've had a run of bad luck."

What the...?! A run of bad luck?!! Oh yeah, Obama had it all going his way, and then, whoopsie, things went a little caca. But he doesn't cite the things that you or I or any reasonable thinking person would ascribe as impactful on the American economy. Nope, it was that darn tsunami in Japan, some trouble in the Middle East and then that crazy European debt crisis. We'd just be going like gang busters if it weren't for the hand of fate. Sheesh.

Oh, well simple. Step one would be get your god damn boot off our necks. Stop threatening to raise taxes, quit spending everything in sight, stop bullying businesses like BP and Boeing, and quit being such a jerk.


"The problem," Obama continued, "is that we've got the kind of partisan brinksmanship that is willing to put party ahead of country, that is more interested in seeing their political opponents lose than seeing the country win. Nowhere was that more evident than in this recent debt ceiling debacle."

Yeah, and the first name on the list of offenders is Barack Hussein Obama. Good grief, can this huckster actually believe he can get away with this nonsense? It's hard to imagine, but he keeps saying it.

This is a little closer look at what he's really trying to drive over the country: 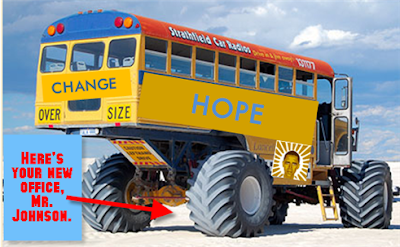 All just part of another trip the White House claims is non-political. Yes, you see, the President's men explain the armoured bus tour as part of the president's official duties to discuss economic issues with the public.

With a hat tip to Jill over at Pundit and Pundette.
Posted by James Nicholas at 12:08 AM